I know I should be working on my real work for my real job, but discussing this is of far more interest to me at this point in time. Then I’ll get to work, I promise. This weekend, my boyfriend and a couple friends of mine went to the Winter Carnival Beer Dabbler, which was definitely a good time and a cluster at the same time: a cluster of a good time. Some highlights:

1. After getting pre-wistbanded (their attempt to handle the lines better than last year which one woman claimed were a mile long) at the Bulldog, we went on a hunt for some pre-beer dabbler eats. Lowertown, if you some of you don’t know, is pretty much only bustling during the week when Securian is in session, if you can even call it bustling. We found a variety of places that were either a) packed or b) crappy. So after walking in circles around Meer’s park, we settled on Barrio, a classy Mexican restaurant, where I insisted on getting a pre-beer dabbler Summit EPA (which, as always, was delicious, and went well with my tostada). It all worked out in the end, and by 4 we decided it was time to check out the festivities.

2. At this point, we saw a line going around the corner of the building where we new the beer dabbler was. Thinking, ‘oh yeah, we got prewristbanded, we’re fine’ we walk straight to entrance around the other side of the building, leaving the line behind us. The lovely man told us ever so politely to keep walking straight and to get into the line. Which line, you ask? THE line. The line that went all the way around the city block, that began a mere twenty feet in front of the man who had directed us to get into the line (Which be believed to be starting around the corner, closer to the entrance). He was wrong. The prewristbanding attempt was a massive failure and we waited in line anyway, got reprimanded by a cop for skipping the line (which I promise didn’t make sense), and still weren’t the last people to get into the beer dabbler. If you’re familiar with the farmer’s market, you can imagine how packed it was. Which was fine, until my feet started to freeze, which is no one’s fault but my own. 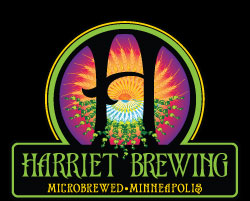 3. Ok, so no onto beer talk so you don’t just think I was pissed about the line situation and them overselling the tickets the wholetime (I was, and will no longer be attending any of the Beer Dabbler’s illustrious events): the favorite by far was Harriet’s Coffee Elevator Doppelbock. It was the most delicious stout made with Ethiopian coffee I have ever had (bold statement since I had originally thought it was Half Pint’s Stir Stick Stout, which will still always have a place in my heart and then there’s Surly Coffee Bender). I’m trying to get more information about where I can get more of it, and when I have it, I’ll let you know. Harriet has seriously proven themselves to be a great addition to the Minnesota Beer Scene.

4. A conversation I had with a guy waiting in line for Crispin: for the last three or four beer fest type events Crispin has shared theirspace with Fox Barrel, which definitely confuses people. They assume that that’s a kind of Crispin, which means a) they’re idiots, and b) Crispin isn’t differentiating themselves enough (or maybe Fox Barrel isn’t either). Either way, it’s spurred my deeper interest in ciders, which I will be posting in later blogs. But know that Fox Barrel is different from Crispin. They are not from Minnesota (California) and they only do pear cider. It’s actually pretty good stuff, and ciders in general are on the up and up. So why not try one?

5. I submitted my homebrew (that Mike and I made: a honey ginger IPA) in a homebrew competition for the first time. Yeah, yeah I know it’s something I should’ve done a while ago, considering my history with homebrewing (I mean, I’m not a 55-year-old dude who has been brewing since his 20s. I’ve been brewing for about four years). But I finally did it! I’ll let you know how it goes. I got a $5 gift certificate for Northern Brewer for even submitting my beer (which was a surprise to me) and like not worth that much but it was nice, for my next homebrew supply trip. I did realize, that I hadn’t taken off the old labels off my bottle (it was a reused Magic Hat bottle), so woops, it might be disqualified but they’ll still rate it. Either way, I’ll let you know! I’m excited! 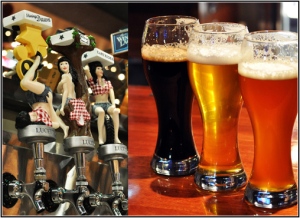 6. I discovered there’s a new Wisconsin brewery that opened in Menomonie called Lucette. At first, the logo confused me, I thought it was some weird architectural black and white POS, then I realized it was a woman, like a mud flap pin-up, which is the same image on their taps. Their website says,“Lucette is hand-crafted by guys and brought to life by the artistry of a woman. Don’t be offended or embarrassed by her voluptuous curves or stunning assets—she isn’t. Lucette is an image of revolution and evolution, much like experience a non-macro beer for the first time. And what’s more, she is created from the finest ingredients by the hands of our own brewers, at our own brewery, and not by some mysterious brewery far away from “home.” In other words, she is not fake, diluted, or overproduced—she is 100% Lucette.” I’m torn, because this is a great way of describing a beer and their mission, and right on par with the market of men loving beers that say something about women (positive or negative, generally in pun form, e.g. Flying Dog’s Raging Bitch, which has had its share of issues with feminists across the United States). It’s just so… man. Of course all the brewers are men, and of course this idea of the ‘not fake, diluted or overproduced woman’ is the pin-up with big boobs and a tiny waist. It just confuses me (maybe because they called me out on it from the get-go, telling me not to be offended), and makes me wonder if they’ve even thought this hard about it. Probably haven’t, but who IS Lucette and what does it actually mean?

Ok, so that’s about it. Relatively uneventful underwhelming time at the Beer Dabbler, although I did get some free swag and cheese out of it (there was a huge line, of which I did not partake). I think I’m going to stick to just the St. Paul and Minneapolis Beer Fests from now on.