As I was eating my Caesar salad earlier this week at Biaggi’s in Eden Prairie (please, it was for work, you think I would normally go to Eden Prairie, much less Biaggi’s?), all I could think about was how my salad would be so much tastier with a nice lambic beer, not unlike the one I had at the beer pairing event I went to the Thursday before. A small group of us sat down with the only female certified Cicerone (beer sommellier) in the United States so she could teach us about pairing beer with food: the final frontier.

The idea itself is an interesting one and not one that any beer fiend (friend?) would not be even slightly familiar with: beer + food = yum. But it goes much deeper than that. Fancy restaurants have been limited to fancy wines with their fancy foods, and cheap restaurants have been limited to cheap beers with their cheap foods (i.e. burgers and buds). But the divide is a divide no more and it is of utmost importance to the beer community that beer regain its rightful place next to wine in fancy restaurants with fancy foods, and maybe even fancy beers with cheap foods at middle range restaurants (like the ones I frequent, and presumably, you too). It’s not a divide; it shouldn’t be a divide. Both beverages provide something different to food that in the end, offers a different experience overall. Various fancy restaurants have caught on to this and are diving right in, trying new things, learning as much as possible, providing the best experience. While smaller middle range places have embraced it fully and made it a mainstay (Muddy Waters?), but it’s not as simply as a long beer list, it’s further and involves a knowledgeable staff and an extensive beer-friendly menu (and the desire to combine the two). Enough about that. Here’s a little bit about what happened:

I walked into the Kitchen Window in Calhoun Square in Uptown; I see it every day (well, hopefully every day) when I go the gym but thought it was nothing more than a ‘kitchen’ classroom learning area to excite people about the store and the available products. I mean, it is, but on that night, it was much more. The lights dimmed, and as I sipped on my ‘welcome beer,’ the mood changed. The Cicerone, Nicole, stopped by my table, asked me how I was doing and what my involvement was in the beer community. Stumbling on my words, afraid to say ‘beer blogger,’ I said very plainly ‘beer enthusiast.’ She smiled, almost a little too long, and said, ‘That’s great! I hope we have fun tonight,’ and walked away. She reminded me of the chemistry types I knew in college, very knowledgeable, a little awkward, with a deep passion for science and trying to explain things to me on an elementary level since I dropped chemistry freshman year. She had brown hair and glasses (not unlike myself, all of my female friends, and pretty much all the girls who graduated from Macaletser during my time; that was for dramatic effect, I don’t think she wore glasses, but I’d bet my life that she was wearing contacts, so the point still stands). I liked her, but I was nervous. I was one of three females in the room; it was me, her, and the wife of what I believe was a brewpub (current or future) owner, but she seemed more into the food. And then there was me, by far the youngest and most bright-eyed, taking notes in my ‘brew book,’ the sacred place I keep notes on my homebrews and beer-related things, not unlike my discarded chemistry lab journal. 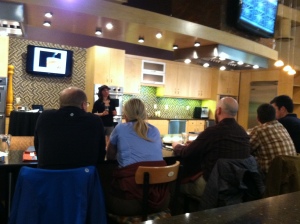 She started with a brief powerpoint on the power of beer tasting and pairings. For most of us, this was the first time we’d gone to a beer tasting, much less one that provided dinner and discussion. So I think everyone was nervous (except for the owner of the Kitchen Window, who sat next to me taking notes on what I believe was the service and how things ran overall, rather than the content). All I could think was, ‘I wish I hadn’t had that beer at Republic before this… and those chips with guacamole.’ I was hungry, thirsty, full, and satisfied all at the same time. But most importantly, I was ready to learn.

First off, let me tell you, there is a lot of science to beer tasting, with discussions of phenols and esthers (I repeat, I stopped taking chemistry years ago). She glossed over it, knowing we were ready to roll up our sleeves and get our palettes wet. The most interesting aspect of the powerpoint was the explanation of how exactly food is paired with beer, either in contrast (also known as ‘cut’) and harmony (similar, I imagine to wine): it either complements or contrasts the food, drawing out certain elements of the beer and/or the food and making you taste them less or stronger. The next slide had a picture of Homer with a thought bubble above his head with a beer in it and he’s saying ‘mmm beer,’ and we began.

The first course was the aforementioned Caeser salad, paired with two different sour beers. The first, a complement, accenting the lemon and parmesan flavors, while the second was a contrast, accenting the breadiness of the croutons (which, interestingly enough, is the point of the croutons to begin with). I am both ashamed and proud to say that this was my first experience with a true Belgian lambic beer (the beer tasting was heaving in these, as she said, Nicole had a background in Belgian beers. How one gets a background in any one style of beer, I don’t know), and it was delicious. It was light, like champagne, but fuller like beer, and made the Caesar salad the best Caesar salad I’ve ever had (which could be in part because I’m not a big Caeser salad person). I decided not to finish the second beer, because these weren’t just 2oz pours, they were almost full beers (in fancy, style-appropriate glasses, mind you), and I had four more to go.

The main course, a margarita pizza made on an Egg grill (which is sweet, and they know it), was next. And this is where things got interesting and she started waxing poetic about beer tasting and the crux of why beer tasting is important, both as a beautiful and flawed art. Tasting is, in essence, subjective, described and experienced only by the taster, but the only way one can become a good taster is by tasting, listening, and sharing with other tasters and beer judges. This made me feel all warm and fuzzy on the inside, thinking that yes, yet again, beer is a social activity that will continue to be so, and relies so heavily on it to flourish. It is not relegated to the ivory tower of elite tasting and enjoying. Everyone tastes certain things better than others (and even master Cicerones have their weaknesses), and because of this, every taster (like every beer drinker) should be heard and respected. 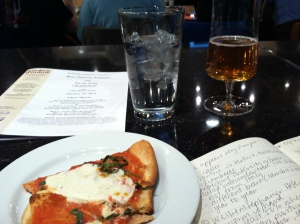 “Close your eyes, smell it, taste it, swirl it in your mouth, experience the beer,” Nicole said. “It’s called ‘vision tasting,’ just let your mind and genetics be free. Talk to others, no one is wrong. They can taste something you can’t. Ask them what their mind came up with.” I was wondering when she was going to ask us to get out our crystals. But then I sort of got into it, letting my mind wander; I thought more about the pizza, the burnt crust and how it reminded me of the pizza we used to have at that one beach pizza place in Bali, until it got too commercial and busy. Mmmm, pizza.

Besides the hippie bullshit, I’m being constantly reminded that I’m being more of a woman than I’ve ever been, hyper aware of my every move, every deliberate pen stroke with my fancy pen in my fancy moleskin. I’m not finishing my beers, I’m not eating my pizza crusts. I’m just observing, writing, and progressively getting drunker. I have to pee. Then they bring out the cheesecake. I hate cheesecake. But I want to see what she’s talking about when she says the next beer is a Russian Imperial Stout which complements the chocolate crust. I used to say I greatly disliked this style, but I’m intrigued, and drink it all. “It’s like having coffee with dessert,” Nicole says, and I completely agree. It’s like the after-dinner coffee without the caffeine and it’s delicious. But then they switch gears and bring out a champagne flute of the fruitiest most delicious berry lambic beer I’ve had (note: I have not had many, I am talking about fruity beers in general). Again, my opinions about fruit beer have changed. I mean, I’m not going to drink it all the time, but there’s a time and place for these, and it was here and now (unlike Berryweiss). It added a deep raspberry accent to the cheesecake which completely blew me away after the previous coffee-like pairing. I wanted it all at the same time.

I downed the rest of my beer while chatting with the owner of the Kitchen Window. A homebrewer himself, this too was his first foray into tasting/pairing and he liked it. The question was, was it worth it for the Kitchen Window? They lost money on the event (despite the $60 everyone threw down), and was this their target audience? Maybe not. Compared to their usual class, there weren’t enough women. Not enough couples. Too many professionals who probably won’t shop at the Kitchen Window even after this positive experience. But that wasn’t the point of the event. It was to learn more about beer and how it can be further integrated into our lives through pairing while understanding why. Isn’t that the future of craft beer and homebrewing, to get more education and drink more (good) beer? Provide that, and the women and couples will come, because they too, are the final frontier of beer.