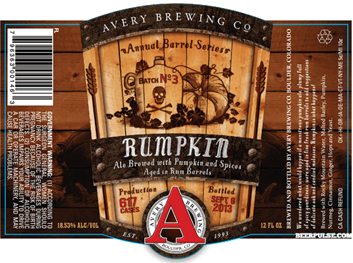 Note: Wynkoop Brewing Co’s website is very user-unfriendly, and has absolutely NO mention of their pumpkin beer = FAIL. Granted, this beer was created a little over a month ago and is part of their “even smaller batch” series.  But STILL. 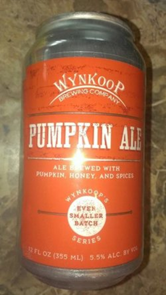 Availability: Colorado (all people from MN must come to CO in the FALL!)

Pumpkin aromatics excite the drinker when first sniffing this beer.  But unbridled excitement quickly dissipates into angry disappointment when taking one’s first sip.  While the pumpkin is apparent from the aromatics, upon imbibing the godly-gourd flavor disappears and is replaced by a boring, malty English ale completely void of pumpkin.  However, this beer is still delicious, and the initial fragrances ignite the imagination.  But much like Charlie Brown in the pumpkin path waiting for the great pumpkin, I’m unsure if the pumpkin flavor is real, or just a figment of Linus’ imagination.

What is it with Salt Lake City and brewing pumpkin beer?  How do the Mormons do it, without being able to drink alcohol??!  Seriously, HOW? (Editor’s note: the beer scene in Utah is bumpin’, but is definitely not driven by Mormons. The conservative liquor laws have actually forced craft beer to push the envelope in the state. All bottles and all high gravity. AWESOME.) 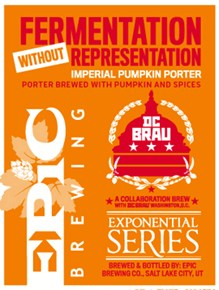 Availability: 14 states across the country, including (allegedly) MN!

Description by Epic Brewing Co.: “The essence of the fall!  This beer explodes with aromas of sweet spices giving way to chocolate and roasted malt.  Flavors are reminiscent of fresh-cut pumpkin and chocolate and complimented by hints of clove, fresh Madagascar vanilla beans, nutmeg and allspice.”

This is the twelfth release of Epic’s Imperial Pumpkin, and yet the pumpkin is missing.  The stout as a whole is just that, a stout, but not a bad one per se.  But in terms of it’s pumpkin-y goodness, it’s as if Epic took all the chocolate candy from Halloween, threw in some pumpkin seeds, and dubbed it king of Halloween-town, without any reason except for the high alcohol content putting “imperial” in its name.  Even Jack Skellington had reason to doubt his appointment as pumpkin king, and I feel like this beer may be better off in the hands of Sandy Claws than advertised as an overture to autumn.  Even though it is a tasty stout, I don’t appreciate the price tag or deception, and am royally disappointed with its pumpkin title. 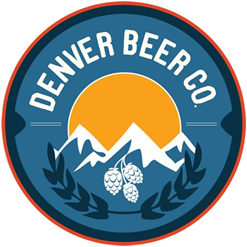 There’s nothing scarier in Colorado than Aurora.  Seriously. Do you even READ the news?  So I was a bit suspicious when Dry Dock “suddenly” came out with a “pumpkin” beer. 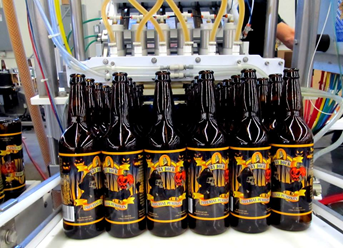 Availability: all liquor stores great and small (probably not outside CO for now)

Description by Dry Dock Brewing Co: “This spiced Imperial Pumpkin Ale is Autumn in a glass. Real pumpkin added into the mash brings a rich, smooth base to this copper colored ale. Saigon and Indonesian cinnamons, nutmeg, ginger, allspice, mace and cloves spark thoughts of all of the gruesome things that make this such a special time of year!”

Holy Headless Horseman.  This beer is AWESOME!  Warm pumpkin pie straight from the oven greets your nostrils as you inhale this fragrant ale.  From first smell to first taste to the bottom of the glass, I can’t get enough of this beer!  The pumpkin added directly to the mash highlights the “classic” pie spices of cinnamon, nutmeg, and allspice, but I think the secret ingredient is cloves.  Every year I make pumpkin pie from scratch, and you have to add CLOVES in order to make PUMPKIN pie.  Luscious, light, and lascivious, this ale will seduce your taste buds and make you cheat on what you thought was your favorite pumpkin beer.

Even though Boulder parents don’t vaccinate their children, leading to this past year’s pertussis epidemic, I do appreciate the beers produced by those hippy-dippy Sierra Club yuppies.

Color: bronze-gold, not much head when poured from the can into a glass (as beer should be)

Year of conception: Since 2011 (won a gold medal at the Great American Beer Festival)

Availability: some liquor stores great and small (probably not outside CO)

Case in point: Upslope’s Pumpkin Ale.  While not the most creative of names, this beer truly has it all.  A mixture of subtle, unnamed spices (cannabis, perhaps) plus organic pumpkins with an adorable name (Baby Bear!) make this beer irresistible.  A rich, malty flavor leaves you satisfied, without feeling like you just ate an entire bag of mini-Butterfingers.  The honeyed aftertaste glosses over the palate and lands delicately in your stomach.  Deliciously rich, this ale makes me want to spread peace, love, and pumpkin beer.