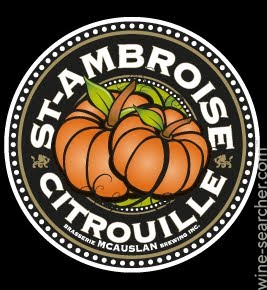 Color: dark red when held up to the light, purple-tinted bubbles rising to the top

Description by McCauslan Brewing: “Each year as the leaves fall and the north wind blows, St-Ambroise Pumpkin Ale make its return – a magical potion that casts a potent spell with its well-crafted blend of blond and caramelized malts, gentle hop, cinnamon, ginger, nutmeg, cloves and pumpkin. Its delicate malty character and hint of sweetness will quench any creature looking for easy-drinking refreshment.”

Buying a Canadian pumpkin brew may seem a bit “fou” (crazy) to some, but when faced with a beer I’ve never before seen, out comes my wallet!  This beer has amazing autumn colors, and transforms the entire pint glass into a magical lava lamp.  Faint nutmeg and cinnamon greet the nostrils when placed directly above the brew, but the spices really come to life when they cascade over the tongue.  This ale has a bite that quickly disappears, leaving your tastebuds searching for more.  Alas, while this beer is much more “curiuex” (curious) than I had anticipated, the description by McCauslan holds true, that this is a very easy-drinking refreshment, and not something that hits you in the face and says “CITROUILLE” (PUMPKIN)! 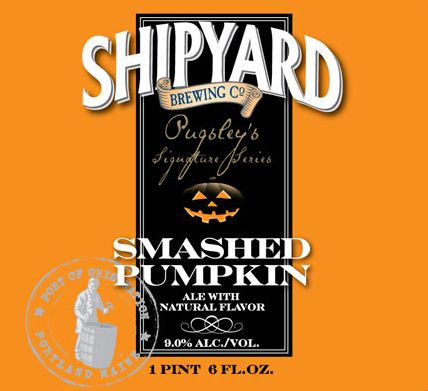 Availability: I bought mine from a liquor store employee in an upscale establishment who had kept it in the back refrigerator for himself.  I’ve since discovered it in our local liquor store adjacent to Denver’s up-and-coming Five Points area (supply>>demand).

Description by Shipyard Brewing Co: “Smashed Pumpkin is a big-bodied beer with a light coppery orange color and pleasing aromas of pumpkin and nutmeg.  The Pale Ale, Wheat, and Light Munich malts combine with the natural tannin in pumpkin and the delicate spiciness of hops to balance the sweetness of fruit.”

The reason why this beer is so disappointing is that its hype far outweighs its greatness/pumpkiness.  As far as I can tell, Shipyard simply took their Pumpkinhead ale, added some malt, toned down the red-hot flavor, and tied up the whole thing with a shiny wrapper.  That being said, the nutmeg overtones are much more effervescent than the Pumpkinhead, and the sharp, “fire-y” kick doesn’t completely overwhelm the senses.  This beer has a much more mature and palatable body, thanks in large part to the combination of malts.  While the Pumpkinhead Ale has grown from an ugly duckling into, err, a somewhat less ugly adult mallard in the Smashed Pumpkin, I’m still yearning for a pumpkin beer that relies more on pumpkin and less on pumpkin “overtones.”